Life After the Military: My Experience as a Veteran at MIT Sloan 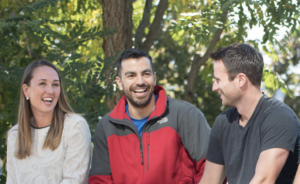 Like most transitioning military veterans, my post-Navy career exploration began about four years prior to my separation date. While veterans of the modern era enjoy the benefits of a society which embraces and supports service members when compared to veterans of decades past, the transition process is still an intimidating, overwhelming, and largely unguided venture. After nearly twelve years of serving as a naval aviator in various FA-18 Super Hornet squadrons, it was time for me to decide what my next logical career progression step would be. Fortunately, I had access to co-workers, friends, and peers who were either attending or applying to various business schools, an advantage many military members don’t have.

Fast forward to December 2017 when I received the life-changing news that I had been accepted to MIT Sloan; I was elated, relieved, and honestly a bit apprehensive. For the first time in nearly 17 years, I was free to decide which school I would attend and where I would live. I was also three weeks out from my final deployment to the Middle East, meaning I would have to make my decision without the ability to attend either adMIT weekend.

As far as difficult life choices go, my decision to attend MIT Sloan was one of the easiest ones I’ve had to make. I reflected on my interview experience and how welcoming and genuine the ambassadors were. I was also impressed that a member of the veterans’ club went out of her way to meet me for dinner and made herself available for any questions I had despite her extremely busy schedule as an MBA/LGO. While my exposure to the school was limited, those interactions were extremely impactful and ultimately drove my commitment to Sloan.

Just over two years later, I couldn’t be happier with my decision. Sloan has exceeded every possible expectation I had of business school in terms of diversity, academic rigor, strong friendships/networks, and unrivaled career opportunities. As a veteran from a very homogeneous community, I was committed to surrounding myself with people from a wide variety of backgrounds, cultures, and life experiences and that has absolutely been the case at Sloan. The size of our school was also very important to me. As members of a class of just over 400 students, we have the opportunity to develop relationships that go well beyond the surface level of the classroom. My classmates are humble, helpful (almost to a fault), kind, brilliant, and driven.

One of my favorite aspects of Sloan is the Ask Me Anything (AMA) panel. Each fall leading up to Veterans’ Day, the veterans’ club leads a panel on our experiences as military members prior to Sloan. This panel gives students the opportunity to learn more about their veteran and active duty classmates in an environment that fosters deep yet respectful conversations. More impressively, these panels often lead to follow-on discussions, helping us all understand each other more thoroughly.

All in all, my experience has been a 10/10. As a Sloanie, I never feel like I am typecast as simply a vet. We are all valued for the various experiences we bring to the table, regardless of our age, gender, or prior careers. I feel confident that the tools I have been armed with have prepared me for my future after Sloan, not only for the immediate next steps, but throughout my entire career.