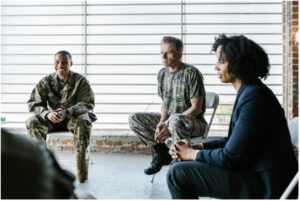 At 24, Todd Baldwin started a 16-month stint in Iraq as an Army artillery officer; he came home in 2008 to the Great Recession. He was relieved when he landed a corporate job at a staffing firm in Nashville. But it soon began to wear on him. “When you serve at a young age and you’ve experienced a lot, when you look at job opportunities, very few things offer fulfillment,” Baldwin says.

It wasn’t long before he lost his job–and realized that his home-brewing operation might be more than a hobby. In 2012, Baldwin and his wife moved to Colorado, where he launched Red Leg Brewing Company, a producer of a craft beer made by–and intended for–military veterans.

Colorado Springs, he knew, had five military bases, and it seemed like the perfect location. The city didn’t agree: Around 30 banks refused him a loan. When he showed up at a local city agency to learn the first steps to starting a brewery, the only resource available was a one-pager on how to start a restaurant.