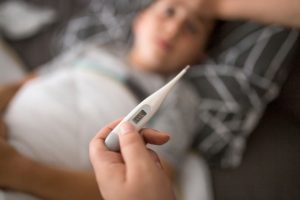 For many years, some parents have noticed that their autistic children’s behavioral symptoms diminished when they had a fever. This phenomenon has been documented in at least two large-scale studies over the past 15 years, but it was unclear why fever would have such an effect.

A new study from MIT and Harvard Medical School sheds light on the cellular mechanisms that may underlie this phenomenon. In a study of mice, the researchers found that in some cases of infection, an immune molecule called IL-17a is released and suppresses a small region of the brain’s cortex that has previously been linked to social behavioral deficits in mice.