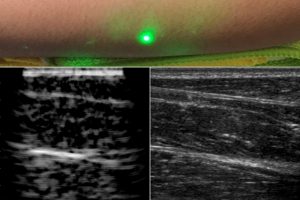 For most people, getting an ultrasound is a relatively easy procedure: As a technician gently presses a probe against a patient’s skin, sound waves generated by the probe travel through the skin, bouncing off muscle, fat, and other soft tissues before reflecting back to the probe, which detects and translates the waves into an image of what lies beneath.

Conventional ultrasound doesn’t expose patients to harmful radiation as X-ray and CT scanners do, and it’s generally noninvasive. But it does require contact with a patient’s body, and as such, may be limiting in situations where clinicians might want to image patients who don’t tolerate the probe well, such as babies, burn victims, or other patients with sensitive skin. Furthermore, ultrasound probe contact induces significant image variability, which is a major challenge in modern ultrasound imaging.