States of growth: When and where entrepreneurship has thrived 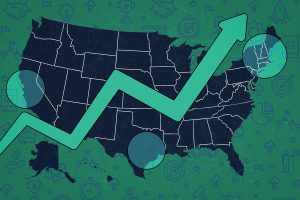 The year 1995 was a good time to be an entrepreneur. Especially a high-tech entrepreneur in Silicon Valley, with the internet boom starting, the economy growing, venture capitalists searching for new investments, and a whole horizon of novel business ideas to explore.

Indeed, a new study co-authored by an MIT professor shows that U.S. startups founded in 1995 enjoyed more growth than startups founded in any other year from 1988 to 2014. Other things being equal, the startups of 1995 were three times as likely to grow significantly as those from 2007, which had to battle through the 2008-2009 Great Recession.

As the study shows more broadly, ambitious startups remain a vital part of the American economy. New business registrations have experienced a long-term drop in the U.S., but the number of startups capable of high-impact growth has risen. Such firms particularly flourished in the mid-1990s and mid-2010s — though even when the ranks of high-growth startups have thinned, including in 2008 and 2009, they have still been founded at higher rates than they were in the 1980s.