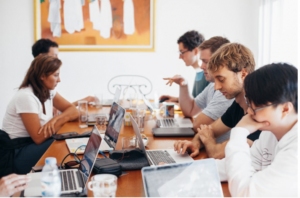 The killing of George Floyd was a galvanizing moment, and companies also took action. Business leaders spoke out. They donated millions to civil rights organizations, and they promised to address problems with diversity and representation inside their own companies. But one year later, have executives done what they said they would do? NPR’s David Gura reports.

DAVID GURA, BYLINE: There were many CEOs who didn’t know how to respond. That much was clear to Darren Walker, who’s the president of the Ford Foundation, a philanthropy that focuses on social justice and inequality.

GURA: And Walker remembers fielding more than a dozen phone calls from executives who he says were disturbed and deeply concerned.

WALKER: There was not both lived experience and expert knowledge to advise, provide counsel and wisdom to the CEOs and the boards.

GURA: One year later, representation continues to be an issue. Just days before the anniversary of George Floyd’s death, the investment bank Morgan Stanley promoted four men to senior leadership roles. It’s widely understood they’ll vie to succeed James Gorman, the current CEO. He’s white, and so are they. At a Senate hearing today, Gorman pointed to other recent promotions, and he said he’s committed to diversity. But…