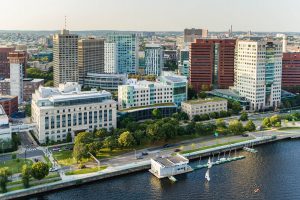 A tech startup that launched in 2016 is planning to double its headcount in New England after raising new investment funds.

MIT spinoff Pison Technology, which has around 40 local employees, closed a $7 million round this month to bring its total funding to $11 million, according to CEO Dexter Ang.

A MassChallenge Boston alum, Pison Technology is developing a wrist sensor that enables hands-free control of electronics. The device, which is the size of an Apple Watch, captures neuromuscular signals on the surface of the skin and combines them with machine learning algorithms to interpret how people intend to move their hands, and transmits those signals to a smartphone to control digital devices.

Led by Lavrock Ventures, the Series A round saw participation from returning investor In-Q-Tel, a nonprofit investment arm of the CIA, and Bose Venture Capital.

Ang first developed the idea for the company when he was taking care of his mother, who was diagnosed with amyotrophic lateral sclerosis, or ALS. The disease causes progressive loss of muscle control.

“My mother literally lost the ability to move her hand to click a mouse,” Ang said on Monday. “As I saw this, then I saw the generalized problem set. … It could be a computer to read a book, or it could be controlling the phone to activate like a smart assistant. Or it could be a factory worker being able to control a machine that’s not within their hand’s reach.”

Thanks to the fundraise, Ang said the company is planning to hire 50 employees over the next two years, including engineers with expertise in machine learning and cloud computing, as well as software, mechanical and electrical engineers.

Currently, Pison Technology is one of the tech companies that have a adopted a so-called “hybrid model,” with each team managing its own meeting cadence. Employees might use additional meeting spaces in Rhode Island and Natick, Ang said.

“Pison is at a very exciting time frame in terms of being able to develop our first products for customers and being able to accelerate that work, as well as invest in our core technology platform,” Ang said. “As we start feeling demand for commercial partners, we want to ensure that we can develop a cohesive roadmap offering.”