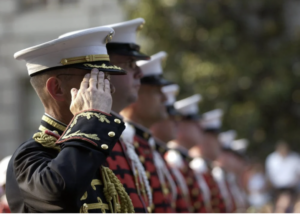 For Jeff Berg, his Navy life began at birth—he was born at Balboa Naval Medical Center in San Diego, California to a father in the Navy. Two grandfathers and a great uncle had also served. As Jeff says: “The Navy’s always been in my blood.”

These days, Jeff is a partner based in McKinsey’s Southern California office, still living in his Navy duty station of San Diego where he co-leads our firm’s West Coast Veterans group and global Customer Care service line within the Operations Practice. He finds himself frequently tapping into his seven-year naval service knowledge when helping clients develop and implement competitive operating strategies. After graduating from the Naval Academy with a degree in systems engineering—a mix of mechanical and electrical engineering—Jeff was selected for the Navy nuclear submarine program.

Following a year and a half of nuclear training—and after living in Florida, upstate New York, and Connecticut, Jeff was assigned to the USS Bremerton, a Los Angeles-class nuclear-attack submarine homeported in San Diego. While on the Bremerton, he completed two six-month deployments to the Western Pacific and an assignment with the Navy’s submarine rescue assets. He fortunately never had to exercise any rescues but was able to pursue an MBA at night at San Diego University as he was planning to start a family and contemplating a civilian career.