How to Spread Tech Across America 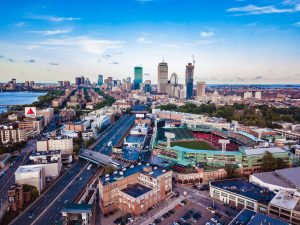 As a few technology hubs and big cities leave much of the country in the dust, towns and urban areas across the U.S. are emptying out and falling into decay. Simply helping people in the left-behind regions move isn’t a satisfactory solution; flourishing cities are often unwilling or unable to accommodate large influxes of new residents, and half-empty towns can’t sustain themselves with a shrunken tax base. Instead, the government needs to do something to revive struggling regions.

In recent years, some thinkers have pushed the idea of using research and development spending to encourage industrial clustering. Evidence strongly shows that government-backed R&D is good for businesses. So why not just direct that spending toward areas that need new business the most? That was the idea put forward by Massachusetts Institute of Technology economists Jonathan Gruber and Simon Johnson in their recent book, “Jump-Starting America: How Breakthrough Science Can Revive Economic Growth and the American Dream.” They suggest spending $100 billion a year to create a string of new research parks, along the lines of Singapore’s Biopolis, in economically declining regions with strong human resources.